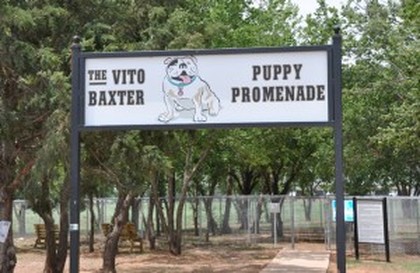 The Vito Baxter Puppy Promenade AKA Dog Park! Lawton's first, Dog Park opened September 18, 2010.
The dog park is on the west side of town.  It is at the old McMahon Soccer park on Southwest Lee.  To get there, you’ll turn south on a gravel road just west of McCoy’s.  This dog park was a long time in coming as well.  The project was $10,000 and funded by the Lawton Humane Society. The city didn’t have the funding for it so the Lawton Humane Society and some volunteers stepped in and donated all the fencing materials and the city provided the labor.  It has an area for small dogs as well as a large.


There is another dog park on the agenda for the east side — just as soon as funding becomes available.
we are a none profit organization finding home for unwanted and neglected dogs ang cats in the city of lawton Oklahoma